Experienced aquarium owners who want to have the most interesting, spectacular tanks in their homes will eventually upgrade from freshwater to saltwater tanks.
With this change comes a whole new world of possibilities.

This makes these tanks easier to sustain, and is good practice for learning the skills necessary to maintain the more difficult saltwater reef tanks.
Overall, they provide the most ideal balance of ease versus making your aquarium look natural and beautiful.

Initial equipment will involve purchasing the aquarium tank, a filtration system, lights, a protein skimmer, and live rock.
Live sand is optional, but recommended.
You will also need to purchase salt water, or the ingredients to make and test salt water from tap water, as well as a water testing system or strips.
If you don't already have it, some basic cleaning equipment will also be necessary, particularly a large bucket specifically devoted to the aquarium and aquarium water.

Do not purchase any fish or other living marine animals with the initial equipment purchase;
they will come later.

If you attempt to add any living creatures to the aquarium before it is perfectly ready, they could die.
This could cause you to waste money on fish that can be particularly expensive.

Note: When buying live rock, thoroughly inspect every hole and nook to avoid introducing mantis shrimp.
as they are very difficult to eradicate once established.

Mantis shrimp are highly undesirable “hitchhikers” in live rock, due to their power and predatory nature.
While they are attractive and interesting, and some people do keep them as aquarium inhabitants, most people regard them as pests.

They will eat other fish and crustaceans, physically damage living rock, and are strong enough to damage the tank itself if they consider it an obstruction.
In adulthood, they can also seriously hurt a fish keeper if they get ahold of a stray finger.

Check out here our guide to buy Live Rocks.

The first thing to do when starting a new FOWLR aquarium is to “cycle” the water .
This means spending 6-8 weeks building a healthy bacterial environment in your aquarium before introducing any fish or marine life.
This is an incredibly important step towards developing a healthy environment for any fish or other sea creatures you intend to keep. Check out more on how to start a saltwater aquarium

The “cycle” is the nitrogen cycle, and the right balance of beneficial bacteria will constantly clean the aquarium water by converting ammonia into nitrogen, in a process essential to life.

Consider the way that the fish you plan to buy would live in their natural environment, where they have no owner to keep their homes clean.
They rely on these other organisms to do the work needed to maintain livable conditions.
That means that these organisms will not only be beneficial to them, but to you as well.

Fish and marine animals constantly produce ammonia in their waste.
This ammonia is toxic, and will kill the tank's inhabitants if it isn't cleaned and removed.
A healthy aquarium requires the presence of beneficial nitrosomonas, which will consume the ammonia and convert it into nitrite.
Nitrite is also toxic, so nitrobacter are needed, who consume nitrite and convert it to nitrate.
Nitrate is less harmful to fish, but is still toxic in large concentrations, and is harmful to corals.

So finally, we rely on denitrifying bacteria that live in live rock and sand, and convert nitrate into harmless nitrogen gas, which is released from the aquarium in the form of air bubbles.
All these bacteria need to be present, in a healthy relationship to each other, in order to create the proper nitrogen cycle and have an aquarium habitat that can sustain marine life.

Note: It used to be believed that the best way to start the nitrogen cycle was to introduce a fish or two that will produce ammonia and begin to feed the bacteria.
This practice is not necessary and is actually harmful to the fish. Current aquarium experts advise against it.

10 Steps to cycle the tank with live rocks

Here are the steps to effectively cycle a saltwater tank with live rock and nurture a healthy marine environment: 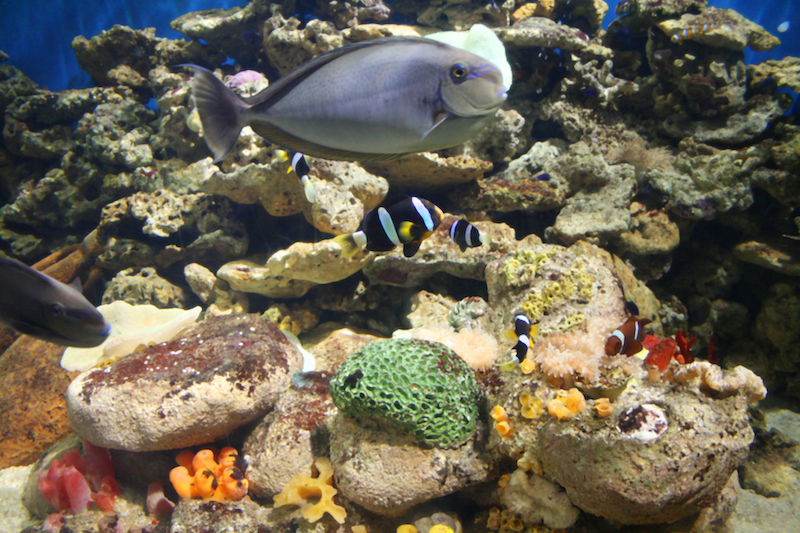 Once nitrite levels are virtually undetectable, it is possible to turn on the lights and begin to introduce the first marine life.
Begin slowly, with hardy creatures like shrimp, snails, or hermit crabs. These creatures are going to have a slightly easier time adjusting to conditions that might not be ideal.
Add one or two to the tank and wait a week, testing the water for continued low nitrites and making sure the inhabitants remain healthy.
After that, it is possible to add corals, and then begin adding fish slowly over time. The bacteria population needs to grow in tandem with the fish population.

Adding too many organisms too fast creates too much ammonia and disrupts the nitrogen cycle, and it will be necessary to start all over again.

If you want to successfully create an environment with a lot of healthy fish and other organisms, it will be important to be patient and work very slowly.
This isn't a process that can be rushed.

When the tank is established and healthy, the sand, water, and live rock can be used to start a new saltwater tank with significantly shortened cycling time.
This is a way that experienced aquarium hobbyists can have a variety of tanks, or help each other out with a head start.
By the time you've gotten multiple tanks going, you'll be sure to be a pro when it comes to taking care of your underwater pets.

Once the cycle is established and the tank is healthy and operational, it still needs ongoing maintenance.
This is going to be very important to preventing any problems before they start and can have an opportunity to seriously effect your fish.
Here is an ideal cleaning and maintenance schedule for the optimal FOWLR tank:

If you've never owned a saltwater aquarium before, then the work involved can seem pretty daunting, but once you have a solid handle on what you're doing it will become second nature and you'll be able to help your fish and other critters live happy and healthy lives.

As long as you keep up with the regular maintenance and cleaning involved with your tanks, you'll be able to prevent any serious problems before they really have a chance to get going.
With regular care, a FOWLR aquarium can be both a fascinating hobby and a beautiful addition to a home.
All it takes is a little patience when you get started, but once everything is in place the payoff is sure to be huge.